There's some level of challenge to shopping with two toddlers. For a long time, I scoffed at people who complained about this. It was SO EASY to take two babies out. What where they complaining about?

This was, of course, during the time period when they happily snoozed in their car seats in the snap and go stroller and let us browse to our hearts' content.

Eventually, they woke up, and preferred to look around. Cool. Hold the awake baby (or at least push back the visor). Aim to shop around naptime so they'll sleep in the carseats (or aim to shop when they're awake so they'll sleep at home. whichever).

Then they wanted more.

Cool.
Let them hang out in the cart. (a double cart is a perk. Thanks BJs!).
Sharing a cart worked great too (until Avery learned to climb out anyway).

Now? It is getting harder. We still take them out to the store at least once or twice a weekend, but while they fit, they refuse to share the top basket anymore. THEY WANT THEIR OWN LEGHOLES thankyouverymuch and two of them, not one. So we hold one and let one ride, or get two carts. We're styling. (We generally shop all together, or one of us goes sans-kids.) And now they're getting impatient. They eat tags off ornaments at Home Depot and the cardboard vanilla box at Shop Rite (gross, kind of, I know, I know). They want to walk. They don't want to hold hands.

How long until we can't shop with them at all?

As a related sidebar, why don't more store HAVE double carts? Lots of people have kids close in age. It isn't just for multiples! We JUST found the multiples carts at our local grocery store this weekend (and we shop there a lot - they hid them in the garage, not the surface lot). There are double carts with cars on the front (4 total seats) except the basket is tiny. So your family of 4 kids can have groceries for a single person? Who planned that? And then there's some triple carts...I went through three before finding one with a functional harness (a necessity when it is holding your kid on the seat...maybe not so important for a 4 ft tall kid). Also, Avery HATED this; only Quinn agreed to the full body harness. Avery needs to ride high like a Queen I guess. :)
Posted by Emily at 10:37 AM 2 comments:

Baby it's cold outside

What is more comical than a little baby (ok, toddler) in a big coat??

Amusingly, this is a 12-18 month Old Navy coat and they've almost outgrown their new skinny jeans in the same size. They have pin thin legs, so that isn't the issue!! Way to be consistent Old Navy. 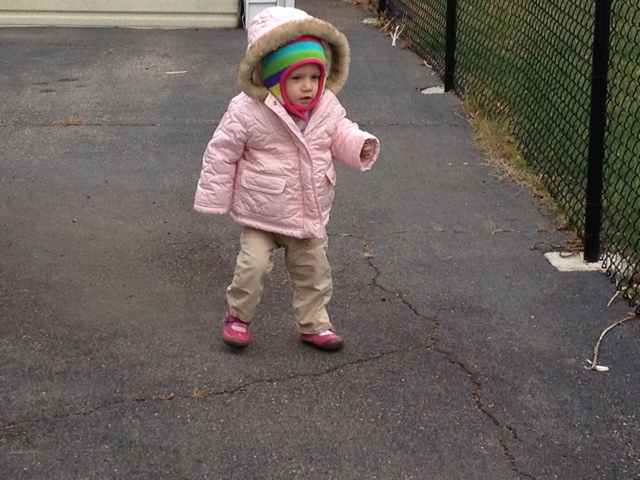 The long version of the EI story

Hopefully my browser won't ditch it like my phone did (ok, I probably did, but I am blaming my phone).

The girls are in daycare and have had colds on and off since fall started. Sad, the summer was nice (coxsackie aside) but expected. Quinn had an ear infection a couple of weeks ago. Fast forward to last Sunday (8 days ago now). The girls were just....off. Hacky. Snotty. Whiny. Warm (100-101ish). Just off. We took them to the doctor, and sure enough, were sent home with instructions to keep them hydrated and use the nebulizer as needed.

They were sent home from daycare with fevers on Monday (101.5 is the cutoff).
Tuesday they were ok-ish, but whiny, slightly warm and continued to be off.

Wednesday they returned to daycare and were sent home at 9:30 am after Quinn spiked to 102.5. (Well, Quinn was sent home so Chris just got them both).
At 10:15, they were both diagnosed with double ear infections. AWESOME.

So Avery is on omnicef ('s generic) again and Quinn is on (or was I guess, since it was a  5 day course) Zithromax's generic (the stuff in the adult z-packs that should kill anything though overprescribing is doing wonders for mutations....). Wednesday night Quinn was still hitting 103 fevers when the motrin wore off...by Thursday morning, just 101, and by afternoon nothing. They had a nice Thanksgiving and were generally happy (if somewhat overstimulated).

By Saturday, all was right with the world, exept Quinn wouldn't eat (hence the pudding of my last post. better than nothing right?). All was well by Sunday (well, mostly. they're still drippy and Chris and I have colds now and are chugging Mucinex which by the way is awesome). Thank heavens for antibiotics. And Motrin.

Of course, now I am worried in advance about the last three weeks of so-so eating and Quinn's weight gain (especially seeing as she barely touched food for 5 days this week) :( Poor peanut.
Posted by Emily at 10:25 AM 1 comment:

I typed out this long post - on my phone, this is a new idea for me, mobile blogging - and lost it. Womp womp.

In a desperate effort to get some food into Quinn this weekend, we made pudding. Huge success!!! And she (mostly) used the spoon properly! 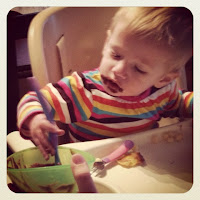 This is a second photo follow up to my 15 month post . All 15 mo + photos actually but who can resist!

Email ThisBlogThis!Share to TwitterShare to FacebookShare to Pinterest
Labels: babies

As part of our rapid spiral into toddlerhood, the girls have started peeing more. Like a lot more. Like soaking their diapers in 10 seconds more. For the most part, this hasn't been a huge issue. I've started adding the NB doublers to our pockets and our old style BG AIOs. We haven't developed a leak issue in cotton, which is what we generally use on the weekend (well, aside from the size Ss which still fit but are getting inappropriate in rise and absorbancy...probably time to pack them up or sell them...).

Last weekend, we took the girls to the NYC Marathon expo. They had on their BG Albert freetimes and I figured all was well. The absorbancy of these is good, more than a standard insert, and they were happy as clams in the stroller sucking down their milk.

They walked around a while then got back in the stroller when I bought some stuff. Then we got them out.

OOPS. Maybe changing their diaper immediately after breakfast (and some milk) then giving them milk in the car (~5oz) then cups in the stroller through the expo (~9 oz) and FORGETTING TO CHANGE THEM for about 4 hrs was a bad idea. Quinn was damp but Avery basically flooded her seat, pants, onsie. You get the picture.

I didn't bring a change of clothes, so she ended up eating lunch in the expo center in her sweatshirt and diaper. It was 45 degrees outside and windy. I hung the pants on the stroller to dry (they did, mostly, before we left -thank heaven for fleece) and had her sit on a blanket instead of the soggy seat.

Needless to say, I think it is time to pick up some more hemp for longer outings when mom might forget about toddler bathroom needs (daycare is excellent with the 2 hr diaper change!).

A couple of weekends ago we had a nap time incident (basically a lot of screaming) and I took the girls for a drive thinking they'd go to sleep. They didn't. So we went to Target.

I got them nice, traditional Orange Pumpkins for Trick or Treating. Why do pumpkins coming in pink, purple and blue? WTF?

We practiced trick or treating at home. So fun.


ok...we're still working on the How Old Are You question...but she's ready for her next birthday!!

Halloween was basically cancelled here by Superstorm Sandy, but we did get to dress up for daycare's Friday night bash.

Email ThisBlogThis!Share to TwitterShare to FacebookShare to Pinterest
Labels: holidays

I can't believe it (I am also a week late. I can't even blame the hurricane. I just forgot.).

They're toddlers now. I mean Toddlers, with attitude. I thought we had more time. Examples:
Words:
Physical development:
Sleep:
no photos today. maybe tomorrow. I'm behind in uploading.
Posted by Emily at 10:36 AM 2 comments: